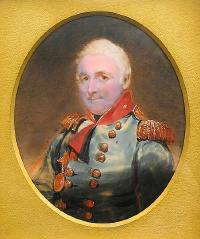 Major William Minto
(b. 1756)
Lt. Colonel William Minto RMA was christened on 9 December 1756 at Southdean, Roxburgshire.1 He was the son of George Minto and Barbara Chisholm.1 Lt. Colonel William Minto RMA married Henrietta (Unknown).2 Lt. Colonel William Minto RMA married Grace Little on 25 November 1812 in St. Giles, Camberwell, Surrey.3 Lt. Colonel William Minto RMA made a will on 2 May 1813 leaving everything to his wife. On 17 November 1826, in a codicil he appoints his wife and Archibald Little (possibly his brother-in-law) as trustees over the sum of a thousand pounds, the income of which was to go to his wife during her life and then the principal to his nephew William Bell. A copy of this will made by William Bell is endorsed in pencil "Coll Minto left a son (also a Coll) who died very suddenly in London in 1837 - Left a Widow but no children."4
He died on 2 February 1827 in Hans Place, London. Faulkner in his An historical and topographical description of Chelsea Vol. 2 p. 85 says that there is an inscription in the burial ground of St. Luke's Church, Chelsea "William Minto, Lieut. Colonel of the Royal Marines, February 2, 1827."5
Appointed Second Lieut, in the Royal Marines, 5th Sept. 1779, and served in America and the West Indies the remainder of that war, during which time he was engaged with the enemy’s fleets in two general actions, and also one in the Magicienne frigate, under the command of the late Sir T. Graves. During the peace of 1783, he served on board several ships on home and foreign stations, and at the commencement of hostilities with France, in 1793, he embarked on board the Phoebe, which was actively employed on the coast of France; and when promoted to the rank of Capt. served in the Hector, Leviathan, and Swiftsure. He had the command of the marines of the squadron at the attack of Minorca, and was landed with a battalion under the command of Maj.-Gen. Strickland, and was at the sieges of St. Elmos and Cappowy, and at the total expulsion of the French from the King of Naples' dominions; afterwards he was appointed by Lord Keith, Maj. of the battalion, and landed to do duty in Egypt under Sir R. Abercromby: the battalion received the thanks of that officer for their conduct in the action of the 13th March. He was next ordered to embark on board H.M. ship Swiftsure, which was captured on her passage to Malta by a squadron of the enemy, under Admiral Ganthom, after a spirited resistance made by Admiral Sir B. Hallowell. In Sept. 1804, he was selected to command the first company of the Royal Marine Artillery, and in July, 1809, the command of the four artillery companies devolved on him, and their services being approved of, they were augmented to 656, which he rendered efficient as artillery both by sea and land; and afterwards volunteered his services with the remaining brigade to Holland, where he was placed under the command of Lord Lynedock, who brigaded them with the Royal Artillery under the command of Sir George Wood.

Benjamin Mitchell was born on 11 July 1753 in York, Maine.1 He was the son of John Mitchell and Lydia Sewall.1

Edward H. Mitchell was born on 1 March 1820 in Winthrop, Kennebec County.1 He was the son of Edward Mitchell and Mary Sewall.1

Francis Ignatius Mitchell was born in 1773 in Myrtle Grove, Charles County, Maryland.1 He married Eleanor Sewall, daughter of Dr. Robert D. Sewall and Mary (Polly) Brent, on 2 January 1809 in Prince George's County, Maryland, (being the date of the marriage license.)2

Frederic Mitchell was the son of Stephen Sewall Mitchell and Sarah A. Kimball.1

George Mitchell was born on 16 January 1837 in Gardiner, Maine.1 He was the son of John S. Mitchell and Philenia Sewall.1 George Mitchell died on 23 September 1837.1